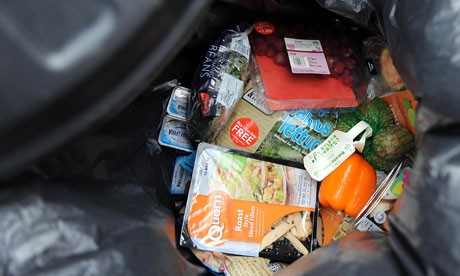 Over the next three weeks, I want to talk about food waste from three different perspectives and how to use a data-driven approach to solve it. Today I’m going to talk about how consumers waste food. Next week I plan to discuss how restaurants waste food and finally I want to look at how farms are wasting food. I also want to present at least one data-driven solution each week that will help reduce food waste. Creating an efficient food system is not only the right thing to do ethically and economically, it is crucial to meeting the hunger challenges we face today.

According to estimates by the United Nations Environment Programme and the World Resources Institute, consumers in industrialized countries waste 222 million tons, or almost as much as the entire net food production of sub-Saharan Africa. Even though the word produces enough food to feed every person, about 1/3 of the world’s food is wasted. I grew up being taught to clean my plate but I never grew up chronically hungry or worrying about the source of my next meal. And I readily admit that until pretty recently, I didn’t think too much if I scraped extra food into the trash without thinking that my actions equaled about 20 pounds of wasted food per person per month.

The 2014 Proceedings of the Australian-based Crawford Fund along with other forums talked about reducing food waste. According to the Food Justice Community Engagement Coordinator at Oxfam, ‘Reducing food waste is one tangible way to engage with the complex issues of food injustice.’  In my March 8, 2016 blog, I presented crowdsourcing data-driven solutions such as Ushahidi and Cropmobster to reduce food waste. Today I want to emphasize another approach to reducing consumer food waste– ReFed.

ReFed is a collaboration of over 30 business, nonprofit, foundation and government leaders to reducing U.S. food waste. It was created in early 2015 to create the first ever national economic study and action plan to scale the problem of food waste. And according to their estimates, consumers in the U.S. waste about 27 million tons of food, or about thirty-four percent of the waste.

Among the 27 solutions presented to all stakeholders, I want to focus on the data from education campaigns and using smaller plates for preventing consumer waste at home. Consumer education initiatives such as the USDA’s MyPlate initiative and the U.N.’s Think.Eat.Save are definitely steps in the right direction, but according to Levine et al, the effectiveness of the campaigns is sometimes difficult to measure with data. Also, awareness alone is not enough to change individual consumer behavior.

So if it’s not enough to just be educated about food waste, I think we need to take concrete steps to reduce food waste at home. Would using smaller plates, bowls and spoons reduce food waste? I wanted to know what the data said rather than just popular anecdotes. One of the few empirical studies I found by Brian Wansink and Koert van Ittersum describes we probably eat more food with bigger serving utensils. In a study of 225 students at Georgia Tech, the students served themselves 8.2% less in smaller bowls and 13.5% less than when using larger utensils. (It’s important to note that we may not eat more nutritiously with smaller utensils as discussed by Libotte, Zlatevska and others.) The Delboeuf illusion  may support the reason why using a smaller plate means eating less since our brain is hard-wired to estimate size.  Although one study does not offer definitive proof in the world of science, it’s a good starting place for me.

2 thoughts on “A Data-Driven Approach for Reducing Food Waste, Part 1 – Your Plate”